Life at sea was formerly a strange mixture of hardship and comfort. Some ships, because of the barbarous conditions in which their crews worked, were known as “Hell Ships”. Other vessels, even in the days when a career at sea was inseparable from hardship, were comparatively comfortable

ONE OF THE MOST BEAUTIFUL OF THE LATER SAILING SHIPS to fly the American flag, the Dirigo, had a bad reputation among sailors. This ill-famed ship was the original of Jack London’s famous “Hell Ship”.

THE worst blot on the fair history of sail, which contains so many magnificent chapters, is the unnecessary brutality found in so many of the old ships, even in some of the best whose names come down to us as examples of all that was finest in the old school. Nowadays “bucko mates”, “hard-case skippers”, “blood boats” and “hell ships” are often treated as romantic; but in the days when they existed there was little romance about them. The toll of life and happiness which they took was terrible, and it is often difficult to understand the brutality of many officers who were otherwise possessed of fine qualities. But the fact remains that cruelty, after it had been checked on land by law and public opinion, remained a normal factor of sea life for many years.

A good deal of the hardship was formerly regarded as unavoidable and inseparable from the design of many ships; this design, however, could easily have been modified, and there were numbers of owners who were always well ahead of the law. The trouble was mostly in the position and design of the forecastle. It was right up in the eyes of the ship, with the hawse-pipes running through it to the windlass below deck, and these could not be properly plugged when the anchors were unshackled. The men lived in water, and the waste of life by sickness was terrible. There was seldom any opportunity of drying clothes except at the galley fire, and the men were often refused permission to make use of that for no better reason than that it was “coddling” them. Comparatively few forecastles were properly fitted with artificial light and heat. Moreover, the ventilation that is considered so important nowadays did not matter then; the sailor hated ventilation, and took the first opportunity of blocking up any ventilators provided. On the other hand, he naturally felt bitter when he saw his meal, when on its way from the galley to the forecastle, carried overboard by a big wave. He was ravenously hungry, and knew perfectly well that the meal would not be replaced.

The whole of the victualling system in nine sailing ships out of ten would be regarded nowadays as gross cruelty on the part of the owners. To save money many owners would buy stores that had been condemned by the Navy – Gibraltar was a favourite call for the purpose of shipping these – but the special stores supplied were often quite as bad, because the owners would not pay for anything better. The Board of Trade inspection was a farce – as it had to be when food condemned by the Navy was openly sold to merchant ships – and it is no wonder that the men became sullen.

Sullenness begets mutiny, mutiny was the offence which the afterguard always dreaded. At a time when punishments on land were harsh, those at sea were made even more brutal. This was done deliberately, for in a small community the least sign of mutiny had to be checked for the safety of all hands. Thus many of the punishments which were officially permitted and even laid down were cruel in the extreme.

The cat-o’-nine-tails was used in the Merchant Service nearly as much as in the Navy, and with far less control. For centuries keel-hauling had been a regular proceeding; this meant passing a line from yard-arm to yard-arm and dragging the unfortunate seaman under the bottom of the ship by means of it. He was half drowned in the process, and, if the ship’s bottom were foul with barnacles, as it usually was, he was terribly lacerated in addition. After keel-hauling had been prohibited as barbarous, it was usual for a defaulter to be towed astern on a line. When these punishments were officially prohibited, and in their place the law provided for the offender to be logged and fined so many days’ pay, the captains maintained, with a good deal of truth, that the seaman did not care a button for money that he never saw, and that the new punishments were thus quite useless. With a good deal of misplaced ingenuity, therefore, they evolved some punishments of their own.

In addition to maintaining discipline and checking any tendency to mutiny, the officers of the average old-time sailing ships were obliged to teach the greenhorns seamanship. Practically every sailing vessel carried a considerable proportion of first voyagers, admittedly or under a cloak, when she put to sea. It was the tradition that these landsmen should be made seamen before the end of the voyage, so that the method depended very largely on the route of the ship. On the long run to China or to Australia there was plenty of time, and, weather permitting, methods of some reason could be employed; but there was little time in one of the clipper packet’s dashes across the Atlantic, and intensive methods were the rule. These intensive methods consisted of every kind of brutality to an under-running accompaniment of the foulest language.

The brutal methods frequently won for their ships an appalling reputation, but it must be remembered that the officers had many difficulties to face. Moreover, they were always aware that a poor seaman could easily imperil the safety of the ship and the lives of those on board. The “packet rats” who largely manned these transatlantic clippers were invariably mutinous. At one end the clippers shipped the toughest crew of Liverpool Irishmen, and at the other end a sprinkling of New York gangsters. Long before newspapers and films made the world familiar with the American gangster, there existed the gangs of the New York water-front. These gangs, which were employed by the crimps and sailors’ boarding-houses, included a fair number of seamen who went for a voyage when it suited them, or when they were forced by circumstances. 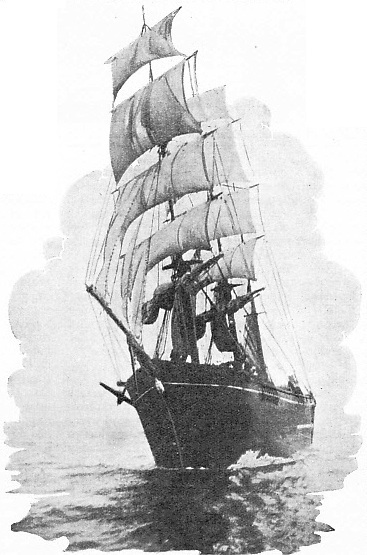 This interesting article is courtesy of ” Shipping Wonders of the World” – See the site below.