Here is a first hand account of being sunk twice in WW2. from Elder Dempster ships. 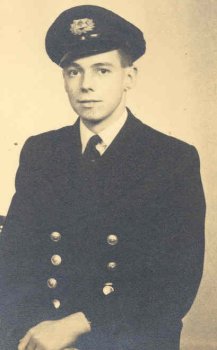 This is my father`s story as told to me many years ago.

“I was born in July 1925, in Stockingford (not far from Nuneaton), Warwickshire – which is about as far from the sea as you can be. I was the youngest by five years of five children and by 1940 with my brothers and sisters all having left home and my mother dead, I wanted to join the Royal Navy. My father could not afford the fees for Dartmouth, so I went off to Liverpool on my own to try to join the Merchant Navy. They must have been suspicious about my age (I had told them I was older than in fact I was) because they contacted my father and he had to come and fetch me home. He wasn`t at all pleased. Not unreasonably, in view of my age (15) he didn`t want me to go to war – he wanted me to stay on at school. However, when I was 16 he agreed to my joining the Merchant Navy and in September, 1941, I was indentured as an apprentice with Elder Dempster Lines Ltd; Liverpool, for a period of 4 years. The pay was £9 for the first year, £12 for the second year, £15 for the third year and £24 for the last year.

I sailed first of all on the ‘Mary Kingsley’ for 10 months and then was appointed to the ‘William Wilberforce’ in September 1942. It was on a run from Takoradi in West Africa to Liverpool with a cargo of palm oil, groundnuts and mahogany logs, that the ‘William Wilberforce’ was torpedoed by a U-boat. We also had twelve passengers including two missionary nuns returning to the UK for health reasons. Blackwater Fever was so bad then in that part of Africa that merchant vessels on that route reckoned to lose one crew member every other voyage from the disease. I had it twice, but a non-recurring variety which made minor medical history at the School of Tropical Medicine at the time).

We had left Takoradi on New Year`s Eve (1942) and zig-zagged our way across the Atlantic until, by 9th January, we were about 500 miles west of the Canary Islands. That day a destroyer approached us and signalled that reports had been received of many enemy U-boats in the neighbourhood. We continued our zig-zag course, but at about 8pm, the ship was struck by 2 torpedoes on her starboard side. I was on the bridge with the chief officer and four others when it happened and, being on the starboard side, I was knocked out by the explosion. Fortunately, the water pouring over me brought me round pretty quickly as within a few seconds the ship started to list and about 10 minutes later she sank.

At first I thought I had been abandoned as I was alone on the bridge. My second thought was to get to a lifeboat. The starboard lifeboats had been blown away in the explosion, so the passengers and some of the crew boarded the two remaining lifeboats on the port side. These were lowered into the sea and the rest of us scrambled down rope ladders and lifelines swung over the side.

The lifeboat that I was in stood off the sinking vessel and the U-boat surfaced. The U-boat commander asked us the ship`s name and where she was sailing from and to. He then asked where the captain was and we said we didn`t know. (He was under a tarpaulin so the Germans wouldn`t take him.) When he asked what cargo we had been carrying, one of us shouted back, “Peanuts.” For a moment things were a bit tricky as the Commander retorted, “I have guns trained on you – don`t be impertinent!”. But that`s what we called groundnuts. However, he gave us our position, promised to report the sinking and submerged.

The rules were that if you were sunk in that part of the Atlantic Ocean you should head west to avoid the counter currents. The captain decided to head east towards land so progress was slow. A discovery was made quite early on that the emergency food rations stored in the lifeboat lockers were missing which was depressing. We reckoned they had been stolen before the ship left Liverpool on her way out and no one had checked since then. However, there was no choice but to head for land and hope that we would be found. To save petrol we tied one boat behind the other, rigged a sail and set a course east for the Canary Islands. When daylight came we realised that three men were missing – presumably killed in the explosions or when the ship sank.

After two days, petrol ran out so we separated the boats and started had to row. We rowed faster than the other lifeboat as we were crewed by younger men and we soon lost sight of them.

It was on the fifth day that were sighted by a Basque ship (Monte Amabel) whose master, luckily for us, had decided on a whim to sail a different route that trip. Once he had picked us up he gallantly spent several hours searching for the second lifeboat until they too were rescued. Upon being brought aboard, I was bloody hungry and thirsty and asked for water. A Basque sailor passed me a huge mug of brandy saying, “drink now, wash later!” The effect of the brandy on an empty stomach was quite dramatic!

The Basques treated us well but as they were bound for Trinidad and had not enough stores or accommodation for us they agreed with our captain that they would put us off at Las Palmas. However, the local authorities there would not allow us ashore, so we went on to Tenerife. Here we were placed under an armed guard and marched through streets which looked pretty unfriendly to us. We were marched beneath an arch bearing the swastika which was scary, but, to our great relief, we ended up at the British Consulate. It was 8 days since the sinking.

We were fed, clothed, given money and told to enjoy ourselves. The Consulate warned us that the Germans on the island would seek us out, and wine and dine us. “Screw them for all you can get but don`t tell them anything,” we were told.

Four days later we all embarked on a Spanish ship to take us to Cadiz. Once again we weren`t allowed ashore but we did pick up some German officers. I spoke some German, having done it at school, so I soon got talking to one of them and we whiled away the hours chatting up a Spanish girl who was aboard. Bound for Marseilles, the ship now had instructions to let us off at Gibraltar (apparently large sums of money had been paid to the Spanish authorities in Tenerife to permit us to go free). Off Gibraltar, three British destroyers barred the way through the Straits demanding the survivors of the ‘William Wilberforce’, so that was how I found myself in a Merchant Seaman`s hostel in Gibraltar.

A few days later I was instructed to join the ‘Mary Slessor’, sister ship to the ‘William Wilberforce’, and we left Gibraltar in the early evening of February 7th, 1943. Then disaster struck again – ‘Mary Slessor’ hit a mine in the Straits that night and sank in 15 minutes. I found myself floating in a life jacket in the Atlantic again. ‘Mary Slessor’ had lost half her crew (including some of the survivors from the ‘William Wilberforce’) and her cargo of oranges and fuel oil was spread across the water around me. I was “off” oranges for a very long time after that!. The convoy sailing past had instructions not to pick up survivors and I was left bobbing up and down in the cold water shouting, “you bastards!” as they went by. Some us clung to an upturned lifeboat for about 3 hours before we were picked up by a Canadian ship and returned to Gibraltar.

With another cadet from the ‘William Wilberforce’ I spent time reading in the library and we came across a story that unless you had spotted a Gilbraltar ape within a week of being on the Rock, you would never leave Gibraltar alive! Needless to say, we shot off from the library in search of monkeys but without success. So it was with some trepidation that we embarked on a Dutch vessel. On her were the pilots of the 3 aeroplanes who had defended Malta and they were nervous wrecks. They spent the days asleep and the nights playing battleships!!

Finally we reached Glasgow. I had lost all my possessions in both sinkings and whilst I was on leave applied for compensation. Meanwhile, father went to London to see if I could transfer to the Royal Navy. Elder Dempster released me from my apprenticeship on 20th May 1943 and 5 days later I joined HMS ‘Renown’ at Rosyth as a Probationary Temporary Midshipman RNR. I served in the Royal Naval Reserve for the rest of the war. In 1946, I tried unsuccessfully to join the Royal Navy once more, so I went back to the Merchant Navy – to Royal Mail Lines this time and stayed there until I finally came ashore in July 1948, aged 23.”

Recommended books with a maritime theme. A chosen list from my library of 800 books….

First up….. “THE FATAL SHORE” by Robert Hughes.

This is a fascinating and detailed account of the start up of the colonisation of Australia. Captain Cook and all that…

“Admiral Byng – His rise and execution”. by Chris Ware.

A great account of time spent on Fatu Hiva, a name familiar to Bank Line navigators from Pacific journeys through the Marquesas islands.

The First “Bellerophon” by Colin Pengelly

A fascinating account of the ship that the men in the Navy called, ” The Billy Ruffian”. This includes the capture and transport of Napoleon Bonaparte to Torbay.

The Boat by Lothar-Gunther Buchheim

NB: Searching for books. Some are out of print, but here is my suggestion how to obtain books. Look on AMAZON first, and check the small print below the title where it often says, ” other offers”. Many books are very cheap in this section. Failing that, look online at “alibris’ – a great site. Another source is “abebooks”, owned by Amazon but still listing independently.

What now follows is a moving first hand account of a WW2 tragedy and rescue, told by Norman Gibson. It comes from the BBC site – “people’s war”and is approved for non-profit use… Many thanks to all.

Click on the text below for the full article